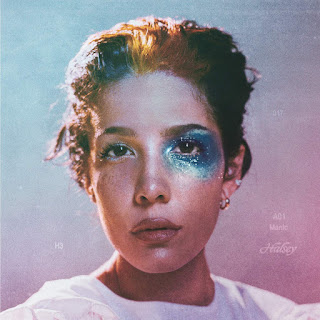 Halsey has finally released her third studio album titled 'Manic'. I have loved Halsey's music ever since her debut album and I was really excited about this release. 'Manic' seems to be a lot more honest and raw than her previous albums which I really like. The title of the album really represents what is present within the album - it is a little all over the place but it still really works. There is a mixture of genres.

What I really like about this album is it doesn't follow a normal musical sound as other albums do - it is something new, original and different. I have to admit, I don't like this album as much as her previous releases but it is still a great album. While listening to each song, you can really have an insight into what Halsey was going through at the time of the writing process.

The album features huge hits that we have heard before such as 'Without Me' (which wasn't originally going to be on the album) and 'Graveyard' and I think my favourite tracks from this album are 'Ashley', '3AM' and 'Still Learning'.

I really like how Halsey is being original with this album. She has also revealed that this was supposed to be an angry album but later worked out that she is no longer angry but it was a lesson to forgive herself. I really like it, it is different and well put together - it tells a story.