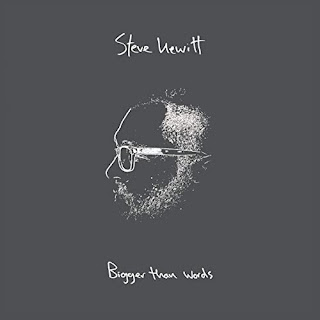 Steve Hewitt is a singer-songwriter from Kent who has released his debut album titled 'Bigger Than Words' under Engine Records.

Steve is very talented - I was sent the album prior to its release and I was amazed by the songwriting and whole production of the album. I know you shouldn't compare bigger artists to smaller artists but Steve has set a standard that most bigger artists need to follow. He wrote the whole of this album himself - the lyrics are true to him and that is what makes this album special and unique.

'Bigger Than Words' is an acoustic, indie-folk album with a few hints of pop. A mixture of genres that really work together. Steve's voice and vocals throughout are amazingly raw and fresh. I love discovering new, talented artists.

My favourite song from the album is certainly 'Fix Me' - the song starts off with the sounds of someone (maybe Steve?) walking on some stones and I find the sound really soothing. Lyrically, the song speaks so loads and the pure, raw feelings and emotions fly out of the track.

The whole album in general is really good and worth the listen. Steve is certainly an artist to look out for - I really think he could be zooming up the charts within the next couple of years.