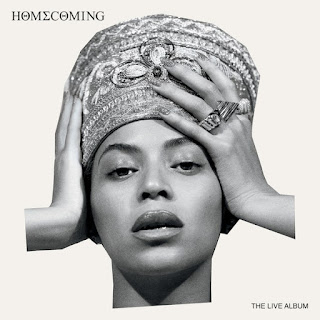 Beyoncé has released the live album of her concert at Coachella 2018 titled 'Homecoming' that follows from the 2 hour documentary of the performance which was released onto Netflix.

I love Beyoncé - her 'Lemonade' album is my all time favourite album EVER and hearing some of the songs from that album live is truly amazing. Everyone knows Beyoncé, she is incredibly talented and after listening to this album, I learnt that she was more talented than I thought she was. The Opera performance at the end of 'Don't Hurt Yourself' / the beginning of 'I Care' is truly fantastic and I personally didn't know she could do that!

Beyoncé really shows that she can do everything, her voice is so versatile and her performances... well... they are FANTASTIC. She really has earnt the title of the queen of music. It is also really nice to hear some of her old songs. I just can't express how talented Beyoncé is! Her vocals were so good throughout, even with her dancing. AMAZING!

I have to admit, when I am just listening to the album on my way to work, I can't connect with the music as much, especially the instrumental parts. I feel a bit lost because I'm not watching it - it is weird to explain but I am so in love with this album. I just love Beyoncé.