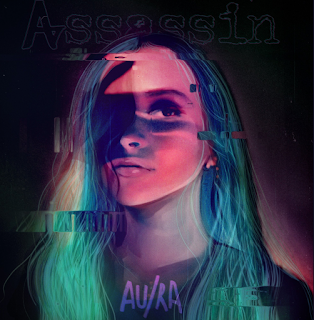 I discovered Au/Ra last year with her EP 'X Games' - I was so invested in her music style and artistic approach. Her lyrics are well written and her voice gives me the chills (in a good way). I loved her as a artist, I felt like she was bringing something different. When she announced that she was releasing a new single, I was so excited and I was so looking forward to hearing it.

'Assassin' follows the same kind-of-sound that her previous music has portrayed. I can hear improvements with the dark-ish vibes it gives off. Her voice is soft, low and quite intriguing. I loved the song as soon as I heard it. She reminds me of Billie Eilish, but I prefer Au/Ra. I feel she is so underrated but her approach to music needs to be heard more.

Au/Ra stated in a e-newsletter 'Writing 'Assassin' was a self realisation. I originally wrote it about someone else, until I realised that it was something I do all the time as well. We all have those moments where we let our dark side take over, where we self-sabotage. It’s so human. So! Not to get too dark – we can get out of that sabotage cycle every time we acknowledge it’s happening. Things do get better, but only if u do something about it.'