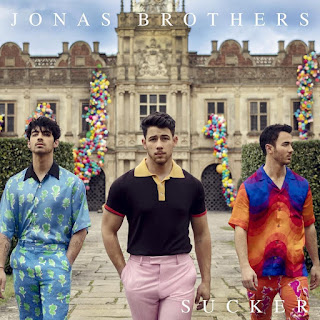 JONAS BROTHERS ARE BACK!!!!! I can hear everyone screaming. If you don't know who they are (how, why, what?), they are a group of brothers (Joe Jonas, Nick Jonas and Kevin Jonas) who formed in 2005. Some people know them best from being part of the smash hit film 'Camp Rock' which also featured Demi Lovato.

It has been a long time since they have released any music but they are back with their new, infectious tune called 'Sucker'. It is such a fun song that is also well produced. The vocals are also amazing but what can you expect, Joe and Nick have been releasing music of the years which has to dominate the charts. Kevin, however, has been a little quite which is a funny joke the fandom likes to say.

The song is about the extraordinarily deep love someone has for their lover. The kind of love the Jonas Brothers say is so deep it makes one do crazy things like 'dancing on top of cars'. 'Sucker' also has a bit of rock-infused while it sounds prominently pop. A mixture of both sound really good. Such a lively, fun song that will go down in history as one of their best songs.

Such a good come back song, I love it!