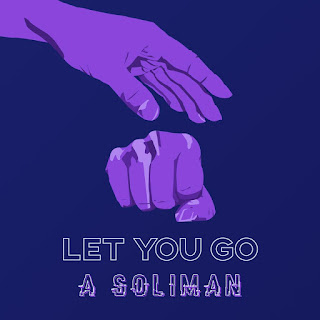 A Soliman is a 20 year old artist based in the UK. He released his first single in June 2018 and has now released his new single 'Let You Go'.

This song is so professionally done. You can really hear how much effort went into this tune. A Soliman is going to be climbing the charts very soon, I know he will. His music needs to be in the charts. We have only heard 2 singles from him so far but the songs seem so much advanced than you would expect. I am really loving his songs and he will be artist I am going to follow.

'Let You Go' is such a fun, well produced song which captures A Soliman's talent so well. I am so excited to hear future stuff from him. This song makes me feel happy and I can't help but bop away to this song. Not only is this song a masterpiece, it is also a very fun song. The little, fun notes and quirky lyrics in the song really make me feel good which is exactly what I want when listening to music.

The song seems to be about a break up, trying to let the loved one go. Break ups seem to be the meaning behind a lot of songs but they can be really hard to get through. Everyone is different and deals with feelings differently which is why it is always good to put your story in a song to let other people know it is OK.

I am so excited to see what is to come for A Soliman!

I got the chance to do a little Q&A session with A Soliman about his new song 'Let You Go':

TE - What was the inspiration behind your song ‘Let You Go’?

AS - The inspiration behind it came from hearing a lot of breakup songs that were more sad than happy. So this song is more of an anthemic breakup song, where I do not care that we are over. It’s meant to be quite empowering.

TE - How would you describe your music to people who haven’t heard it before?

AS - As mentioned before, my music is very anthemic. I want to make a statement with my music, with every song.

TE - What was the writing/recording process like for ‘Let You Go’?

TE - Do you have any plans in the pipeline? Any new music coming up later this year?

AS - I’m aiming to release 2 singles then an EP before the end of the year. Then, I will hopefully start touring after it’s out.

TE - What would you like to achieve in the next 5 years?

AS - I’d like to be able to tour comfortably around the world, and continue going through things that fuel my passion for this art. I’m very excited to see what the next five years bring.