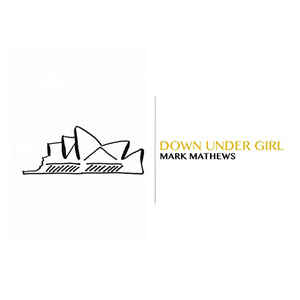 Mark Mathews is a London based Singer-Songwriter that has been described as, arguably the hardest working solo artist in the UK right now. He releases infectious folky Indie-Pop tunes and has performed for the Labour leader, Jeremy Corbyn.

He has been voted one of the best artists in London by readers of the Metro newspaper, awarded first place in the Indie International Songwriting Competition, nominated for 2 Indy Music Awards for best live act and been played on BBC Introducing.

He has now released his new single called 'Down Under Girl' - the lead single from his upcoming EP which is being released later this year.

I am a huge fan of this song but it is a bit different to his earlier releases. It is more folky and acoustic which really sets the scene for this song. 'Down Under Girl' was inspired by his love for Australia. But not only that, as you can see by the title of the song, it is also about an Australian girl - maybe an ex-love interest. Or he could be describing Australia as a female and expressing his love for the country in a whole. Each person has their own take to music and its meaning but that is what I get from the song.

I really like this song - Mark is very talented and has a really good voice. The instrumental behind the song is really contagious and I can't help my feet tapping away to the rhythm. I really like the acoustic guitar in the background also.

I am also excited for the release of his EP. Mark was kind enough to send me the mastered songs before the release and I have to say, it is an EP to look out for - I really enjoyed it.

I got the chance to do a little Q&A session with Mark, all about his new single 'Down Under Girl':

TE - What was the inspiration behind your song, 'Down Under Girl'?

MM - Well, to be clear I never really sit down and decide on a subject to write about - the words and music tend to just happen. But looking back on this song I actually think the inspiration that I was probably connecting to was my, deep love for Australia!

Obviously, on the surface, this song is about a girl, (and I have had Australian girlfriends...but let me just make it clear now: this is not about any one of you, ladies!), but I think the song is actually more of an ode to life down under. I lived in Australia for a while, some years back, and I absolutely adored it. Still do. The country, the people, the girls! All of it. And I think this song is a result of that yearning.

TE - What was the writing/recording process for this song?

MM - Down Under Girl, was written in the exact same way that every song on this up-coming EP (Fizzy Beasts) was written - I de-tuned my guitar (Tuned to DADEAD) because I was bored of playing the same things on the standard tuning I know so well. With this particular tuning, I actually have no idea what I am playing at all. So, it gave me something new to explore and discover - something I feel, is a lot more folky and earthy sounding.

I originally meant to record the tracks as a 'one man and his guitar' record (Just guitar and vocals) with no other instruments but, (to the exasperation of my Producer Andrea Lepori!), as soon as I got into the studio I couldn't help myself and I started to build on the tracks and to add different parts, instruments and sounds!

What was interesting for me was that I wasn't prepared for any of this. Normally, I go into a studio with a very clear and definitive idea as to exactly what each instrument will play and what sounds will be on the record. But this time around it all happened as we went along in the studio - Which meant it took a lot longer to complete than I planned for, but the end result was exciting, for me at least, because I had no idea of what the outcome was going to be. It was like some mad Chef just adding whatever he found in the kitchen and hoping that when the timer pinged to say it was done, it would be edible!

TE - What has been the stand-out highlight from your music career so far?

MM - There's been a few pretty cool things, like performing with Dodgy or playing for Jeremy Corbyn but to be honest, it genuinely is the best when I get lovely feedback from fans around the world. The fact that something I wrote in my bedroom in London, can then resonate with some Brazilian kid or some girl in Russia, is just utterly incredible to me and that buzz will always be the best thing for me.

TE - Talk me through the process of coming up with a song like 'Down Under Girl'.

MM - I sit at my guitar or piano and just noodle around with no specific goal in mind. If I happen to come across a nice chord progression or I start to hear a decent melody, I then just let it all take over - I don't push it, I just simply keep playing what I have over and over and ordinarily, it starts to fine-tune itself and it starts to evolve and all the bits start falling into place. Lyrics almost always come after I have the melody and then after that, I have a framework to then build from and work out the other parts and instruments. There is definite magic to the way a song gets written - something is created from absolutely nothing. I'll be sitting there with no song and then in no time I've got a song about a fictional Australian girl that I miss!

TE - What do you think is the hardest part of being a small artist?

TE - Where can you see yourself in 5 years?

One last thing, Mark has a very good sense of humour. As you could see by the above answers and if you follow him on Twitter, he loves to crack jokes and share his opinions but most importantly, he is very passionate about his music and puts in all the effort he can to make it perfect. I really admire that.