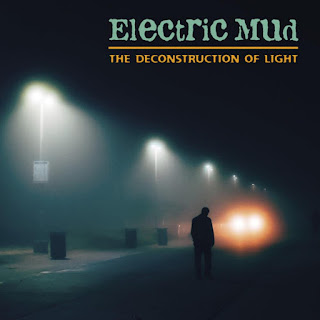 Electric Mud is an instrumental rock band which consists of Hagen Bretschneider (idea, sound concept, bass) and Lennart Hüper (rhythm guitar) and they have always focused on instrumental compositions.

They have concentrated on their own material, producing their first album 'Dead Cat on a Railroad Track' (2013). This work was a production using only guitars, bass and drum machine.

Following their success, they decided to develop their music together resulting in their second album, 'Lunatic Asylum' (2015).

Hagen and Lennart were joined by Nico Walser, who produced 'Lunatic Asylum' as well as playing lead guitar and synthesizers. This collaboration blossomed further on their third album 'Wrong Planet' featuring Nico Walser once again.

After the release of the former albums, Hagen Bretschneider received tones of sound files from people all over the world, who played the guitar or sang vocals along to Electric Mud tracks. The idea was born to recreate some pieces and contribute more instrumental parts for the new album. Rather recomposing than remixing. Over the years the German-based band transformed from a live-trio into a studio project. Then came their latest album 'The Deconstruction of Light'.

I am not usually a massive fan of Instrumental songs, I prefer having lyrics and vocals to sing along too. I sometimes find Instrumental music boring, but Electric Mud has done something to this album to make me love it!

The album consists of 7 tracks:

My favourite tracks are 'Through The Gates' and 'Head In Beds'. I can imagine every song on this album to be featured on a series similar to Stranger Things.

I am not a huge fan of rock music as well, it isn't one of my favourite genres but 'Head In Beds' seems to have a calmer vibe to it as well as 'Through The Gates' and 'Moongarden' whilst 'Black Dog' is very rock-infused and can be quite intense at times. 'Deadend Mind' sounds like a Mortal Kombat-kind-of game, I can certainly imagine is being played in the background when you are trying to win a fight against your competitor.

'Canary In A Cathouse' and 'Suburban Wasteland Blues' are a mixture of intense and calming. They go through different stages. I also really like these instrumentals because it isn't too intense and there are times where you can breathe and collect your thoughts again.

This album wouldn't have been an album I would've initially listen to, but Hagen from Electric Mud reached out to me via email and was kind enough to send me their CD, so I gave it a listen and really liked it. I have to admit, it isn't my go-to album, but when I am in the mood, I will pop it on the CD player or look for it on Spotify and have a good listen. Obviously, there are people out in the world who like this kind of music, everyone's tastes are different - but it is always good to make a change and listen to something different.

I got the chance to have a little Q&A session with Electric Mud, talking about their album 'The Deconstruction of Light':

EM - Our music has loads of roaring guitars, emotional soloing, electronic and synth, and atmospheric layering. The genres of each song are pretty different, so we hope there really isn’t any way to put us in a neat box somewhere. The heavy guitar-driven riff is a major part of many tracks, but there is still plenty of space for soft passages and panoramic atmospheres. None of the instrumentals stays in one genre for long, moving from Krautrock to Ambiant, from post-rock to traditional prog, from edgy to contemplative. Imagine Deep Purple and Camel jammed together with Pink Floyd and Tangerine Dream.

TE - Who comes up with the initial idea for each song?

EM - The initial idea for each song comes up from Hagen Bretschneider. Producer and multi-instrumentalist Nico Walser contribute many arrangements ideas and sound alchemy to compliment Hagen's vision.

TE - How do you name each song when there aren’t any lyrics? (I have always been interested in finding out)

EM - First, we develop ideas for the music. As the structure and arrangements of a new track become clearer, we begin to brainstorm names for it. We try to express the atmosphere and emotions of the music in a few words.

TE - What advice would you give people who may be thinking of creating their own band?

EM - Always experiment. Use everything that makes the sound. Feel absolutely free to do what you want. Sometimes you get some amazing accidents. Most of the time it doesn’t work but the one time it does work you create something amazing.

TE - What has been the stand-out highlight from your music career so far?

EM - The birth of a new track is always a highlight. And it's always a big adventure to release a new album.

TE - So, what have you got planned next? What are you currently working on?

EM - We are currently working on a new album.