Rak-Su - I Want You To Freak | Song Review 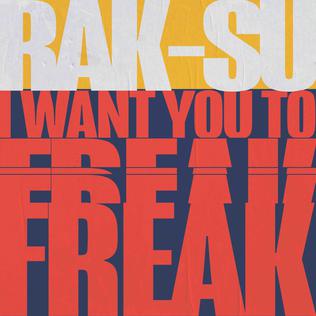 Rak-Su were the second group to win The X-Factor UK in 2017 (Little Mix being the first in 2011). The band consists of Myles Stephenson, Ashley Fongho, Mustafa Rahimtulla and Jamaal Shurland. They rose to fame by performing their own, original songs during the live shows - songs such as 'I'm Feeling You', 'Dimelo', 'Mamacita' and others.

During their time on The X-Factor, Rak-Su scored themselves multiple top-charting songs with their original music and that made everyone excited to see what they would bring out after the X-Factor. They have since released 2 singles - one as a promotional single for their up and coming work called 'Pyro Ting' and their official debut single, 'I Want You To Freak'.

I feel like this song is very different from the songs they performed on the X-Factor. Obviously, an artist is going to grow and find a new type of music they're interested in creating - but this song doesn't have the same vibe as their previous work. I still really like it; it is a fun song to listen too and I can see myself dancing to it - but I do kind of miss their old music they created before and during the X-Factor.

Rak-Su has confirmed that there is an album on the way, which I am excited for. I was a massive fan of them during the X-Factor.

'I Want You To Freak' is a sample of Adina Howard's classic track 'Freak Like Me', with the obvious Rak-Su spin on things. They also worked with some amazing producers/writers Banx & Ranx (Charli XCX, Gorillaz) and Rykeyz (Wiz Khalifa) to create the amazing new single. It also debuted at Number 14 on the Official UK iTunes Charts.

Overall, this is a fun song, with catchy lyrics. I am excited to see what other songs Rak-Su has created in their debut album (expect a review when it is released!).