HRVY - I Wish You Were Here | Song Review 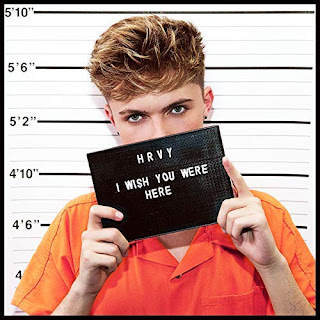 HRVY is a 19-year-old British singer-songwriter. He has released his newest single called ‘I Wish You Were Here’ which was added to my playlist as soon as I heard it and has been on repeat ever since! The song was produced by Loose Change and Mojam and co-written by Corey Sanders, Alex Stacey and Boy Matthews.

He wrote a note to his fans before the release of the song saying it was a ‘pretty big deal to him’ and ‘My whole life has led up to this moment’. Then finishing with ‘it feels like my time and my big shot’.

HRVY has been making music since he was 13 and he seems to be pretty proud of this track which he should be – it is a really good song! The track is a quirky pop song with 80’s sounds and amazing vocals. He has a total of over 400 million streams on all his music so far – amazing! He has been building his social media following for years and it is really paying off.

Also, HRVY is currently on tour supporting The Vamps on their US tour and recently played a sold-out show in London. He has also previously supported Little Mix on the Salute Tour (I was there and it was the first time I had heard about him – he was really good).

This song is so catchy, fun and upbeat song which you can totally dance too. I can see some huge success coming to him soon.

The song debuted at number 14 on the Official UK iTunes Charts and spent 4 days in the charts.

There hasn’t been any news on any album or EP but I am excited for the rest of the upcoming music. HRVY has revealed that there will be a few more releases by the end of the year!

Overall, I really like this song, a really good song by HRVY.