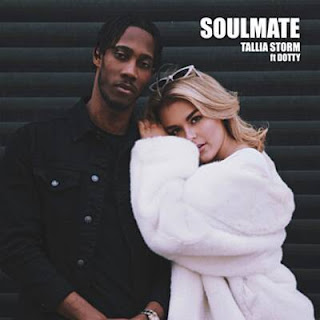 First off, Tallia has been really killing it with her music lately. I find her music and voice so seductive. I am really becoming a huge fan of her music. I truly believe she has found her perfect sound. It sounds like a mix of 90's pop, a bit of R'n'B and major Jazz inspiration. I really like it.

The production is very warm and light which really emphasises on Tallia soft, seductive but powerful voice. She is a very talented musician. 'Soulmate' seems to be more of a 'stripped back' song - it seems like Tallia has taken a different approach with her song writing which could be the right direction to go. I find this song so catchy and so calming.

With the addition of Dotty on the track, he really adds something extra and something that it really needed. The mix of vocals really work. Dotty doesn't have a major part of the song but Tallia doesn't overpower him which I find really nice. A good ratio.

In a statement about the new track, Tallia said: ‘I wrote this song to show a more vulnerable side to myself. At 20 years old my emotions really have a mind of their own and I wanted to depict a more romantic side to my writing. Inspired by a first date I had last year, the song really did write itself. I loved collaborating with Dotty, a South London rapper. His lyrics and emotion’s were everything I wanted this track to convey. I’m excited to independently release this song and the music video, and let the music speak for itself.’

I really believe Tallia is an artist we need to look out for. She has more singles to release in 2019 and I can see her career going in a new direction. I love the new, stripped back, raw sound and I am excited to hear more.