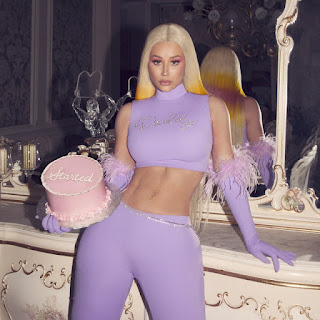 Iggy Azalea has released her new single titled 'Started' which has been confirmed to be the first track on her next studio album 'In My Defense'.

Since Iggy has gone independent, I really see her glowing. She has only released 2 songs independently but they are both statements. This is the true Iggy that we are seeing/hearing and I am here for it.

'Started' is such a catchy RnB/Hip-Hop track that really makes me want to move. I love the production of this song - as I did with her previous release 'Sally Walker'. We first heard this song at the end of the 'Sally Walker' music video and my first impression of the song were great. But when the full song was officially released, I loved it. It has been on repeat whenever I am having a bit of chill time.

The lyrics are well written and quite snappy. I love how Iggy has written this song - it seems like she is using basic English but making it sound top notch, absolutely amazing. I am very excited for her studio album.

Iggy was inspired from Drake’s 2013 single 'Started From The Bottom' and she is letting people know that she is proud of her struggles which led her to fame. From her humble background in Australia to moving to America when she was 15 to pursue a career in Rap. Iggy has every right to brag about her come up and success and I can really see her getting even more successful during this new independent era.

The music video is equally fantastic. Iggy is serving look after look while telling a story of marrying a old man for money. I find the video very comedic with features from Drag Queens Trixie Mattel and Vanessa Vanjie Mateo. Not only is Iggy really showing off her talent in this new era, she is also showing a different side that I personally haven't seen before - I really like the 'new' Iggy.