The Vamps - Missing You | EP Review 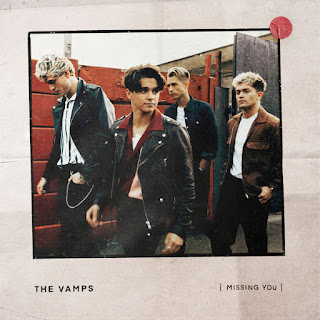 The Vamps have released their new EP titled 'Missing You' which features 4 songs:

The EP follows their usual sound which is very much pop but with drums and acoustic guitar in some parts of the song - their sound has really developed over the years and the sound works really well for them. They are a very talented group but I don't seem to hear much from them. I know they release music quite regularly but I don't hear them in the charts as much as I used too which really surprises me.

The title track of this EP 'Missing You' starts off slow with what sounds like a soft piano playing in the background. The vocals from Brad Simpson (the lead vocalist) creep in. The vocals through out the sounds are raspy but so smooth. The chorus has a little bit of a beat but the whole songs stays quite slow and ballad-like. I don't seem to connect with slower, ballad-like songs so 'Missing You' isn't my favourite song from the EP but it isn't a bad song.

'Right Now' is more of an acoustic song during the intro but slowly brings are more upbeat sound to the song. Krept & Konan feature on this and I really like them on this track. They add something new that we don't usually hear from The Vamps. Obviously, no one in The Vamps are rappers but I really like this feature. One of my favourite songs from the EP.

'Waves' is certainly my favourite song from the album. It has such a jolly feelings to it. I really love The Vamps' upbeat songs. Throughout the song, it does give Caribbean, sea vibes. It has a jolly tune that really resonates to the sea. I love the lyrics and the vocals throughout the song.

The last song on the EP, 'All The Lies (Acoustic)' is also quite good. I have said several times in the past; I can't connect with acoustic songs too much but I do like the lyrics, the tune and the acoustic jives it gives off. This isn't like the usual acoustic songs I usually hear, it sounds a little more upbeat which I like.

The vocals throughout this EP are really good, I can't fault them, they are super talented and this is a really good EP!