The Landed - Don't Look Up To The Stars | Song Review 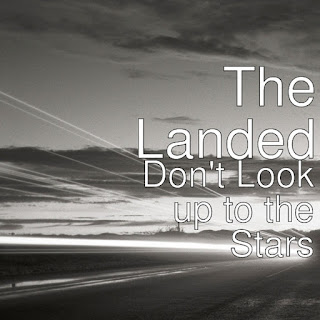 The Landed are a group from Colchester, England who make classic, air-punching guitar driven songs and they have released their new single 'Don't Look Up To The Stars'.

The song starts off making me feel quite tropical... That might be a weird feelings to get but then the drums and guitar kick in and the song becomes alive. The mixture of instruments throughout the song really put a indie-folk/rock'n'roll spin on it. I may be the only person who thinks/hears this but I hear a bit of country in the song. A mixture of genres is really good in my books - taking elements from different genres to make YOUR sound is really important and The Landed are insanely artistic and talented.

I really love the electric guitar solo in the song, it puts a fun spin on things. The vocals throughout the song are mellow but effective. Sharp and snappy - very talented. A really fun and catchy song. The chorus has me singing along. I really like it.

I got the chance to do a small Q&A session with The Landed about their new song 'Don't Look Up To The Stars':

What is the inspiration behind your song ‘Don’t Look Up to the Stars’?

TL - I think it's just looking at what the younger generation are into these days and who they're aspiring to be. There's a lot of reality TV shows around now and I struggle to understand the point of it and what the so called stars of these shows are actually famous for. It annoys me because there's an abundance of talent out there yet we're fascinated by people with none.

How long was the process to write and record this song?

TL - I think it was a couple of months from the idea to the finished recording. The song got built quite quickly but the recording and editing always takes a while.

How did the group form and how long have you been together?

What advice would you give people who are thinking of getting into the music industry?

TL - Maybe don't take it too seriously and remember why you're doing it - because of you're love for playing and making music. It's easy to get caught up in the whole thing of trying to make it which often leads to disappointment and it can become quite frustrating. Just enjoy it and if something comes of it, that's great.

What projects do you currently have in the pipeline?

What are you wanting to achieve in 5 years?

Quite simply to still be out there playing music, making music, entertaining people and most of all enjoying it as much as we do now.