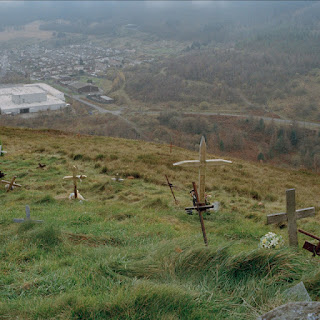 The Gallery is a four piece Alternative/Rock band based in Wakefield, England. Their aim is to redesign what a guitar band can be and convert their post-punk nihilistic flavours with hooks and rock tendencies - says their Spotify bio.

The band have released their new single 'Pesticide' which is straight to the point with snarling, anti-authoritarian, lyrics; this track sets an abrupt benchmark for what is to follow in the group’s career. Its vicious, brash chorus is conflicted by its spaced out, reverb licked verse combining heavy, post-punk nihilism with an entirely new form of indie-fuzz.

There seems to not be many lyrics throughout the song but it works. I have to admit, I am not a massive fan of Alternative/Rock but this song is quite good. I just don't really vibe with this genre of music - nothing against this song or the band. I think this is the perfect amount of Alternative/Rock that I can tolerate.

No doubt, this group is very talented and I can see them doing really big things in the future! It may not be the kind of song I would regularly listen to but I can still spot talent.

I got the chance to do a little Q&A session with The Gallery about their new song 'Pesticide':

TE - What was the inspiration behind your new song ‘Pesticide’?

TG - Pesticide was birthed to describe society and all that is wrong with it.

TE - What was the writing/recording process like for this song?

TG - The writing came very fast in all honesty but the song went through many deaths and rebirths before we could take it into the studio. The studio time was extremely fast and unconsidered which isn't a bad thing.

TE - Who would be your dream collaboration?

TG - A collab with Joff Oddie would be sweet.

TE - What is your main goal for the next 5 years?

TG - Our main goal will be to increase our following and live presence around the UK and play various slots at mid range and large festivals before tackling Europe and Asia.

TE - What are you currently working on? Any new music? Secret projects?