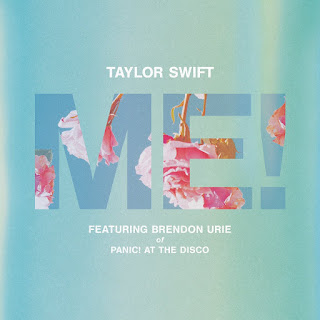 Taylor Swift has teamed up with Panic! at the Disco's Brendon Urie on her lead single titled 'ME!' for her upcoming seventh studio album.

I was excited for this release but also kind of nervous. From the marketing/teases Taylor and her team was posting on Social Media, this era seems to be very colourful whereas her previous era for 'Reputation' was quite edgy and some may say emo-like. I loved 'Reputation' and I wanted Taylor to stick with her edgier side.

When I first listened to 'ME!', I didn't like it. It was very pop - kind of too much pop for me. I have seen a few people say this and I agree - this song seems very childish compared to her last era. I truly hear that. I am not a massive fan. It doesn't seem to be lead single worthy.

I also see people say that the song didn't need Brendon Urie but I disagree. I think he really suits this song and his vocals are really nice and smooth and adds something good to the track.

I really see this song being a promotional song for a movie like Trolls or something - maybe even some kind of musical. No doubt, Taylor always releases songs that are catchy and stays in your head for ages but I am a little disappointed. When the lead single of a era isn't right, I makes me nervous for the rest of the era. I really hope the songs improve. Saying that, the song has grown on me and I think it will continue to grow on me - it seems to be one of them songs you need to listen to quite a few times to really jam to it.

The video however, I really like it. It is very colourful and sometimes kind of cringey but it really fits the song. Taylor's music videos are always high budget and so cleverly thought out. I always love them and no matter whether I like the song or not, I LOVE the video!