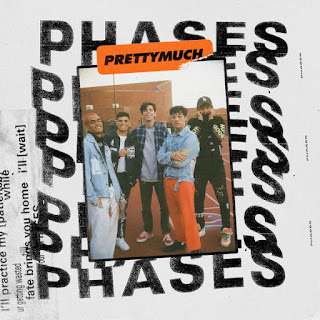 PRETTYMUCH have released their new single 'Phases' and it has to be my favourite song of theirs.

I have never been a massive fan of PRETTYMUCH, I couldn't connect to their music as much but I gave them another chance I really like this song. 'Phases' isn't too upbeat but it isn't too slow. It has that infectious beat that you can bop your head or feet to.

'Phases' is PRETTYMUCH’s first explicit track, with the band claiming it is “real raw PRETTYMUCH.” I really love it when artists but real feelings into a song, it makes it so much personal and really nice to listen too.

The members of PRETTYMUCH are keeping the meaning of the song a secret. It has been revealed that this songs follows a true story that has happened to one or all of the members.

I really like this song, it has a really good feel to it and the vocals through out are insane. As I have mentioned, I haven't really listened to PRETTYMUCH before but I love the combination that this group delivers. There are vocals, really good lyrics and rapping. This group seems to be the whole package.