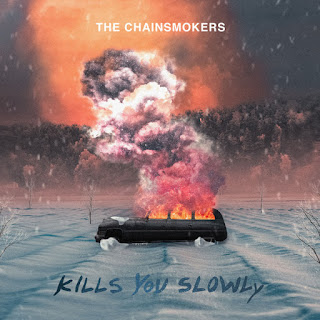 The Chainsmokers has released their brand new single called 'Kills You Slowly' which is from their upcoming studio album.

It is nice to see The Chainsmokers doing a song on their own. I haven't really heard or listen to one of their songs that there isn't a feature on. Their vocals are really good and the production is so smooth throughout the song. I think I prefer their voices and songs without a feature.

'Kills You Slowly' talks about a couple that are fighting and on edge, trying to fix what’s left of a seemingly broken relationship. Both sides put on fake personas and try to hold in arguments, fights, and disagreements to please others, even if it does kill them slowly.

I can't get over how smooth the production and vocals are - I am not shocked because I have loved their collaborations before but wow. The chorus is very catchy with not many lyrics and I also love how the song dips into a slow melody with a prominent beat during the chorus but the verses are full beat.