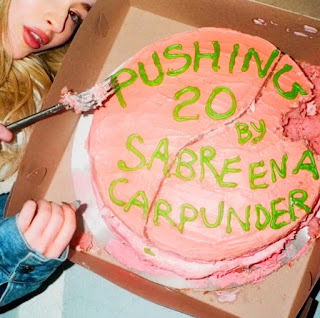 I might be the only person that thinks this but this song has a grown-up, mature sound to it. She released her last album in November 2018 and the progression I can hear from this song and the last album is insanely good. I really like this song.

It has been confirmed that this song is the lead single from her upcoming album 'Singular: Act II' which is being released later this year.

The song is about how Sabrina doesn’t care about other people’s opinions and how she would rather spend her time dealing with her own responsibilities. Throughout the song, there are elements of all different genres blended into one but still has that strong pop sound that Sabrina is best known for. I feel like she is really experimenting with music and it makes me so excited for her next album.

Sabrina first played/performed 'Pushing 20' at the first show of the Singular Tour in Orlando, Florida. She introduced the song with a personal story ''I wrote this song ‘cause I was at a time in my life, by the way, like, six weeks ago? Like, not even that crazy long ago. But it was at a time in my life where, you know, I think a lot of you in this crowd, no matter what age you are, are going to go through that period in your life where you start making choices and having a lot more responsibility. And then you have to, like, think before you speak and think about the repercussions of things. And there’s just a lot on your plate and it becomes very heavy and there becomes, like, one day where you start listening to yourself before you listen to the opinions of other people.'' Something her fans and people all over the world needs to hear. Life can get really hard at times - especially growing up as it happens so quickly without you realising.