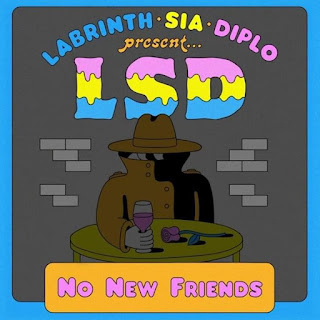 Labrinth, Sia and Diplo present LSD again on their new track 'No New Friends' which is the lead single from their upcoming self-titled album due to be released in April 2019.

I know LSD (the group) have been releasing music for a while now and it was a group I never knew I needed. I have LOVED every single song they have released and I am very excited for their album. 'No New Friends' is another amazing song. Lyrically artistic and production is amazing.

Their music, videos and single/album covers are so aesthetically pleasing and the team-up works so well. I seriously can't wait for their album. It is an album I am going to buy and stream like mad.

'No New Friends' features Labrinth and Sia singing about the friends they already have; saying that they’re happy with their current lives while Diplo helps with the bubbly, bright, upbeat production.