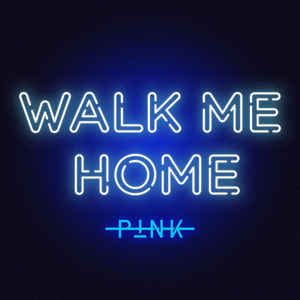 Everyone knows who P!nk is... Her music was so popular when I was growing up. She has so many iconic hits such as 'Raise Your Glass', 'Just Give Me A Reason' and many others. She has not released a new single called 'Walk Me Home' which seems to be the lead single off her new era. Her next album is being released in April and it is called 'Hurts 2B Human'.

P!nk has such a unique but iconic sound - her music is so catchy but also has a catchy beat. Some may say her songs sound the same but I don't think that. I just think P!nk has found a sound that is successful but also comfortable for her.

'Walk Me Home' is all about strengthening the power of a relationship. Throughout the song, P!nk is serving vocals. It does seem like I have heard this song before, whether it has a sample from a song in that I can't figure out the name or it generally sounds like one of her previous releases.

I really like this song and it is already doing so well in the charts - I can't wait for the future releases.