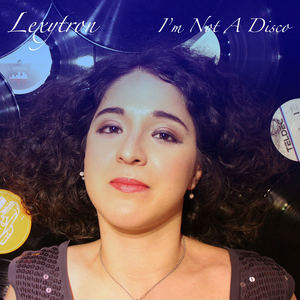 Manchester-born singer-songwriter, Lexytron, first got involved with music at a young age playing the piano and violin. She released her debut single in 2018 called 'Blackmail' which is the lead single from her upcoming album 'Something Blue'. The album is set to be released mid-2019.

She has now released her second single from the upcoming album. The new single is called 'I'm Not A Disco' which is a female-empowered electropop anthem. Throughout the song, Lexytron throws football metaphors at a character's (or her own?) former love interest and kicks him in the guts with lyrics such as ''I'm not a glitterball''.

If I am being honest, electric pop-kind-of music is not a go-to for me - I don't seem to have a 'connection' with the music but this lively song automatically puts me in a good mood and all I want to do is get up from my desk chair and dance around my room.

The song was released on the 25th January 2019 but it has already been played in Lexytron’s live set and in November 2018, the single debuted at the ‘Ultra Ballroom’ cancer charity event at Leeds’ Royal Armouries after a fan asked to perform a jive to it.

I love this song - I think when anyone hears it, it will instantly put them in a good mood. It is just very jolly and such a happy-vibe kind of song with the powerful female-empowering lyrics. I can't wait for the rest of the album to be released!

I got the chance to have a little Q&A session with Lexytron all about her new song, 'I'm Not A Disco' and the next plans for her music career:

TE - How would you describe your music to someone who has never listened to it before?

L - It is hard for me to describe my sound because to me it sounds like ‘me’ and I am hoping that you, as music writers, will start to help me out!  I think I would describe it as playful, purposeful pop.  I am not afraid to dabble with different sounds and genres and one song might be gipsy folk-blues whereas another might be a classic Burt Bacharach-style ballad that tugs on your heartstrings. Since I play violin and piano, a few of the songs are more delicate but then Mike, my guitarist, has brought his electric guitar riffage to the table making other songs sounding roaring and epic.  Something that people have said to me after the live shows are that my lyrics are “clever”, “quirky” or “witty”, which I’m down with!

TE - What was your inspiration behind your song ‘I’m Not A Disco’?

L - That would be telling! It's a female empowerment pop anthem. Literally speaking, it's two fingers to the bad boy who broke the girl's heart over and over again and who is trying to emotionally rugby tackle his way back into her life. At the start of the song, she is thinking it through but by the key change, she is shouting it from the rooftops: 'You can't dance around with me. I'm not a glitter ball'.  But it could apply to any situation where someone is finding their voice after they have been used and abused - whether it is in a professional or romantic relationship.

TE - What was the recording/writing process like for this song?

L - I wrote the song - lyrics and chords - about 8 years ago but I could never work out if it was any good! I played it for Mike, my guitarist who I worked with to produce the album, and we discussed the idea about making it electropop. I know he was channelling New Order vibes with the drums and bass during the recording.  The protagonist is trying to shake off the impression that she is a ‘disco’ if you listen to the lyrics but I find that I like to pop that masks its misery! It could have equally ended up as a folk song or a piano ballad, which are both different ways that I like to play the song live.

TE - What are you currently working on? Any new music, album, shows?

L - Next up, I will be releasing another single, ‘Brand New’, which has also been given a dance makeover by the mixer of my album, Marco Meloni.  I am interested to see whether people are going to prefer that or the original guitar version! I’m currently working on the music video too, parts of which were filmed on my recent trip to South America.  My album 'Something Blue' is finished and will be released hopefully around June.  I’m also playing shows around London to support the last two singles, but hopefully, as word spreads, I will be able to play in other places.

TE - Who would your dream collaboration be?

L - The million-dollar question! Purely for who he is, I would say Paul McCartney because which Beatle fan wouldn’t want to sing a Beatle song with a Beatle? Since that feels like a bit of a cop-out, I think musically maybe Rostam Batmanglij and I could do something cool in theory.  He’s been working with the likes of Charli XCX and Maggie Rogers.  Plus his mother is a very famous Persian chef, so maybe I could get some free meals out of the situation!

TE - Where do you see yourself in 5 years?

L - I try not to put pressure on myself in terms of timescales because I have learned that life is so unpredictable that it is better to just enjoy the ride! Whatever I do, I expect music will be in somewhere in my life as it has always been part of who I am.  If I have not been writing music, I have been playing it – either as part of an orchestra or band – or have been going to a gig or DJing.  For now, I’m focusing on sharing this album and connecting with people.

TE - What has been a stand-out moment in your music career so far?

L - Making this album.  It was one thing writing songs and it is another thing going through the entire process of recording an album from scratch.  It was an experiment for me and it was Mike’s first crack at producing after playing in a band for years.  However, together we have produced an album which seems to be connecting.  I had one of my fans perform a jive to ‘I’m Not A Disco’ in front of hundreds of people at a ballroom dancing competition in Leeds for cancer research.  It brought a smile to my face to think that the song had taken on a life of its own.  Releasing ‘Blackmail’ also brought me in touch with radio stations and fans from as far away as Peru and India and it is incredible to think that the music has gone that far.  That’s the power of the internet! Talking to you is also a privilege – it beats an evening staying in and watching Netflix! Sorry, Netflix.