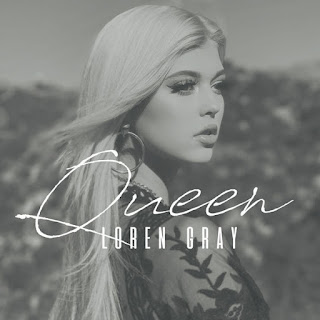 Loren Gray is a Social Media Influencer - with more than 50 million followers across multiple platforms - who rose to fame on Musical.ly/TikTok. She has been nominated for many Teen Choice Awards and has also worked with HRVY on some music projects.

She has now put her foot into the music industry, signing a record deal with Virgin Records. Loren has released two previous singles called 'My Story' (2018), 'Kick You Out' (2018) and has now released her newest single called 'Queen'.

The empowering third single from her up and coming debut EP is edgier than her previous releases but I think it really suits her. Loren explained that the song is about the importance of knowing your worth in all the different types of relationships you have in life, including the relationship with yourself. Loren spoke about the meaning of the song in an interview, “It’s so important to me that they [my fans] know we’re in this together, and that if I can do all this, then they can do it too.”

I personally really like the song. I have never really seen any of the content Loren produced online but I have heard of her before. I am happy that Social Media Influencers are now moving into the music industry. Music isn't just about talent, it is an art form that most people love, including myself.

Being able to put your feelings into a project like music is very important and can help millions of people. I feel the importance of this song to Loren. Talking about her own experiences with having a bad relationship with other people and herself is inspiring so many young people and helping them through their own problems.