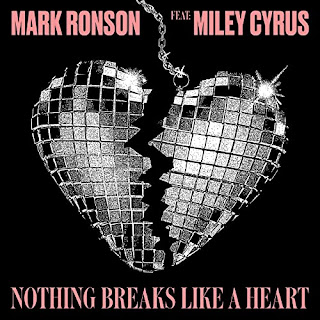 Miley Cyrus is back, featuring on Mark Ronson's song 'Nothing Breaks Like A Heart'.

Mark Ronson is best known for his smash hits, 'Uptown Funk' with Bruno Mars and 'Electricity' with Dua Lipa. He has recently released his new single with Miley Cyrus called 'Nothing Breaks Like A Heart' as the lead single from Mark's upcoming fifth studio album.

The collaboration between Mark and Miley has been rumoured all over Social Media for a while and it has finally been released.

You can definitely hear the country inspiration from Miley - she really fits country music. The song explores heartbreak and resilience and Mark describes this song as a 'sad banger'. The music video for the song touches on gun culture and the political culture we're in.

I really like this song - it represents Miley's Nashville roots with similar disco sounds to 'Jolene' by Dolly Parton (Miley's godmother).

This is really a disco tune - I can imagine doing the typical disco dance moves to this song and also a bit of barn dancing. Soothing, western vocals from Miley really makes this song work and it has become one of my favourite songs that Miley has been featured on. It isn't too over the top but it isn't too slow either - a really good 'sad banger'.