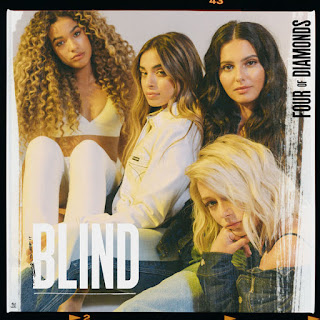 Four of Diamonds are an all-female group who competed in Series 13 (2016) of The X Factor UK, mentored by Louis Walsh.

They were originally eliminated at Judges' Houses but they were re-instated in Week 2 of the live shows following the withdrawal of a former group from the competition. They were eliminated in Week 5 after losing the sing-off to Saara Aalto, finishing in 8th place.

Since their elimination from The X-Factor UK, they have been working hard in the studio, creating their own music. They released their debut single at the beginning of 2018 called 'Name On It' - such a great debut single! Since then, they have released 4 other singles, including their most recent one - 'Blind'.

'Blind’ is a slick Pop/RnB which sees the group open their eyes to their lovers’ deception. It is such a contagious track - you will be singing along to the chorus after just one listen. Delivering plenty of sass, making their listeners want to dance to the track.

Who's Sarah? Who's Jane?

This song was produced by Tré Jean-Marie, Freedom and the one and only, Jonas Blue!

I am super excited about Four of Diamond's career - they are so talented and I think the songs we have heard so far is only the start of something great. They have fantastic voices and they keep releasing bop after bop.