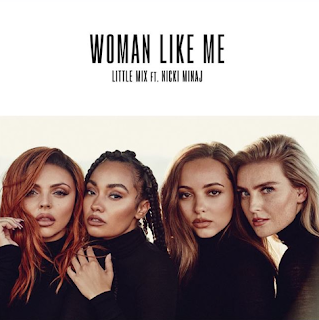 Little Mix is back with a brand new single featuring Nicki Minaj called 'Woman Like Me'.

I have been a MASSIVE fan of Little Mix since they were formed on The X-Factor UK in 2011.

Little Mix is a British girl group who was formed in 2011 during the eighth series of The X Factor UK. They were the first group to win the competition and they signed with Simon Cowell's record label Syco Music and released a cover of Damien Rice's 'Cannonball' as their winner's single. The group consists of Jade Thirlwall, Perrie Edwards, Leigh-Anne Pinnock, and Jesy Nelson.

After 7 years of wanting to collaborate with Nicki Minaj, it has finally happened!

The song was released on Friday 12th October 2018 and straight away topped charts all over the world. It has achieved Number 1 in 20 countries (including the UK), Number 1 in the Worldwide iTunes Chart and Number 5 on the US iTunes Charts. It has been (so far) a smash hit.

The group's fifth album will be released in November 2018. 'Woman Like Me' will serve as the lead single from the album. The song is a reggae fusion and R&B song, with an urban groove.

Jess Glynne stated she wrote the song for her album 'Always In Between' (2018) with Ed Sheeran and Steve Mac, but that it 'didn't fit where the album was going', so she gave the song to Little Mix to record.

The song is about women empowerment, which is what the girls always strive to write about within their songs. I really like how Little Mix does want to talk about female empowerment - they are really inspiring to so many women!

I really like the song. It has a catchy beat and catchy lyrics and Nicki really fits with this song. You can't imagine anyone else on this song. I can't wait to see the music video - I have a feeling the visual's of Little Mix's next few videos are going to be amazing, it seems to be their aesthetic this era.

Overall, this song is amazing - I really like it. I am so happy with how successful this song is at the moment, the girls deserve it so much!